Galactosemia is a condition in which the body is unable to use (metabolize) the simple sugar galactose.

Galactosemia is a disorder that affects how the body processes a simple sugar called galactose. A small amount of galactose is present in many foods. It is primarily part of a larger sugar called lactose, which is found in all dairy products and many baby formulas.

The signs and symptoms of this condition result from an inability to use galactose to produce energy. Researchers have identified several types of galactosemia. These conditions are each caused by mutations in a particular gene and affect different enzymes involved in breaking down galactose.

Classic galactosemia, also known as type I, is the most common and most severe form of the condition. If infants with classic cases are not treated promptly with a low galactose diet, life-threatening complications appear within a few days after birth. Affected infants typically develop feeding difficulties, a lack of energy (lethargy), a failure to gain weight and grow as expected (failure to thrive), yellowing of the skin and whites of the eyes (jaundice), liver damage, and abnormal bleeding. Other serious complications of this condition can include overwhelming bacterial infections (sepsis) and shock. Affected children are also at increased risk of delayed development, clouding of the lens of the eye (cataract), speech difficulties, and intellectual disability. Females with classic galactosemia may develop reproductive problems caused by an early loss of function of the ovaries (premature ovarian insufficiency).

Galactosemia is an inherited disorder. This means it is passed down through families. If both parents carry a nonworking copy of the gene that can cause galactosemia, each of their children has a 25% (1 in 4) chance of being affected by it.

There are 3 forms of the disease:

If an infant with galactosemia is given milk, substances made from galactose build up in the infant’s system. These substances damage the liver, brain, kidneys, and eyes.

People with galactosemia cannot tolerate any form of milk (human or animal). They must be careful about eating other foods containing galactose.

Mutations in the GALT, GALK1, and GALE genes cause galactosemia. These genes
provide instructions for making enzymes that are essential for processing galactose
obtained from the diet. These enzymes break down galactose into another simple sugar,
glucose, and other molecules that the body can store or use for energy.

Mutations in the GALT gene cause classic galactosemia (type I). Most of these genetic
changes almost completely eliminate the activity of the enzyme produced from the
GALT gene, preventing the normal processing of galactose and resulting in the life-threatening signs and symptoms of this disorder. Another GALT gene mutation, known
as the Duarte variant, reduces but does not eliminate the activity of the enzyme. People
with the Duarte variant tend to have much milder features of galactosemia.

Galactosemia type II results from mutations in the GALK1 gene, while mutations in the
GALE gene underlies galactosemia type III. Like the enzyme produced from the GALT
gene, the enzymes made from the GALK1 and GALE genes play important roles in
processing galactose. A shortage of any of these critical enzymes allows galactose and
related compounds to build up to toxic levels in the body. The accumulation of these
substances damage tissues and organs, leading to the characteristic features of
galactosemia

Infants with galactosemia can show symptoms in the first few days of life if they eat formula or breast milk that contains lactose. The symptoms may be due to a serious blood infection with the bacteria E Coli.

Symptoms of galactosemia are:

Tests to check for galactosemia include:

Infants can be fed: 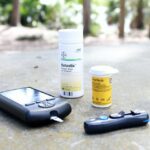 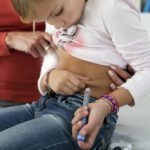