More evidence is needed to rate glucosamine hydrochloride for these uses.

Side Effects Of Glucosamine Hydrochloride

Some glucosamine products do not contain the labeled amount of glucosamine or contain excessive amounts of manganese. Ask your healthcare provider about reliable brands.

The appropriate dose of glucosamine hydrochloride depends on several factors such as the user’s age, health, and several other conditions. At this time there is not enough scientific information to determine an appropriate range of doses for glucosamine hydrochloride. Keep in mind that natural products are not always necessarily safe and dosages can be important. Be sure to follow relevant directions on product labels and consult your pharmacist or physician or other healthcare professional before using.

Consult your doctor or pharmacist.

All information has been provided courtesy of MedLinePlus from the National Library of Medicine and from the FDA. 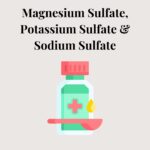